Ginger (Zingiber officinale)  spice basically come from roots of the plant. Scene, many years ginger used for medicine & also used as floor ingredients globally. Ginger is also grown in many parts of Asia, such as China, Japan, and India, but now from last two to three decades it is grown in some geographical parts of South American & Africa.

Ginger spices is one of the most commonly consumed spices globally, Due to it’s metabolism or metabolites. On other side Ginger has been fractionated into at more than 10 bioactive compounds, including gingerol, paradol, shogaol, 1-dehydro, gingerdione, hexahydrocurcumin, tetrahydrocurcumin, gingerenone & many more.

Ginger (chemical)substances & it’s bioactive compound (chemicals) improve the stomach & intestines function, but besides this might also aid the brain & nervous system to control nausea. In addition, it might also use for menstrual cramps, osteoarthritis, diabetes, migraine headaches, and other conditions, but there is no sufficient scientific evidence to support many of these uses.

Researchers provides some evidence regarding the potential effects of ginger against SARS-CoV-2 infection & highlights its antiviral, anti-inflammatory, antioxidative, & immunomodulatory impacts in an attempt to consider this plant as an alternative therapeutic agent for COVID-19 treatment. Ginger also helps in the symptoms like cough, cold, and body ache due to its Vata-Kapha balancing nature.

Krupacare ginger root powder one of the finest product typically based on the principles of Ayurveda. Along with these, the ginger(spice) also contains dietary fibres, potassium & various other vitamins such as Vitamin C, Vitamin B3, Vitamin B6 which are super essential to maintain overall good health. However, our organic ginger (sonth) powder is made of just one ingredient so you can rest easy that each pinch of ginger (sonth) powder is loaded with authentic taste with best aroma.

We have more than 50+ herbal product on our store & shipped all over US. Krupacare believe to serve highest quality (Herbal) products at compatible price. Our aim is to provide better & healthier life to our society & nation.

In Ayurveda, ginger is used as a medicine & sattvic spice in both fresh (adrak) & dried (shunthi) form. It is suitably suitable for all three dosic constitutions of vata, pitta & kapha. Furthermore, It is also an important part of many Ayurvedic medicines because it supports & enhances the healing effects of other herbs & ingredients.

Ayurveda has always been significant to Indian household as an everyday remedy to maintain good health. During the COVID-19 Ginger and other herbs like(Turmeric, Black pepper, giloy, & many other.) may helps to give basic cure against COVID-19 symptoms like headache, sore throat, runny nose. 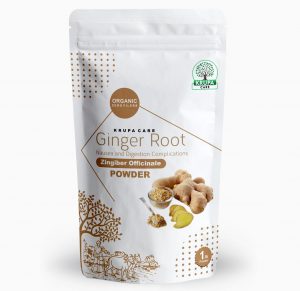